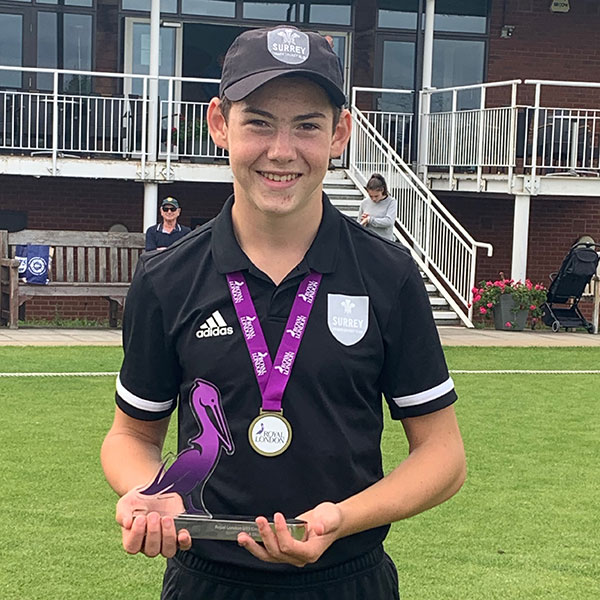 SURREY U15S HAVE BEEN CROWNED NATIONAL 50 OVER CHAMPIONS AFTER BEATING THEIR YORKSHIRE COUNTERPARTS BY FIVE WICKETS AT KIBWORTH CC ON THURSDAY.

RCC’s Tom Humphreys was the star with the ball, claiming figures of 3/36 from his allotted 10 overs, with all of his wickets removing a member of Yorkshire’s top five. Read the full article

In addition to playing for RCC U15s when available Tom has played a mix of u14, u15 and EPP cricket for Surrey this season. He’s had a fairly spectacular summer, with both bat and ball. Surrey U14’s will have won the regional London and South East event. Tom has mainly played a year up playing for the Surrey U15, winning the regional group and then moving on to nationals. Wednesday was the semi-final against Lancashire which they comfortably won and Tom had a good day with both bat and ball. Thursday was the final against Yorkshire which he bowled beautifully taking 3 of the top 5 batsman, batted 7 but scored a cover drive for 4 to win the final. Which was a very exciting experience for him

Are you new to the area or looking to change clubs? Rowledge Cricket Club is always on the lookout for new players of all ages and standards. If you are a former regular cricketer who’d be willing to make a ‘comeback’ for a couple of games, or a Dad with a son or daughter playing for RCC, or perhaps an occasional cricketer who’d be willing to help out please get in touch…